In June 2021, a group of Sindi and Baloch activists in both London and Karachi gathered in protest of the large-scale land grabbing and illegal occupation by Bahria Town in Karachi, Pakistan.¹ ² With support from the Pakistani government, Bahria Town—a privately owned real-estate development company—have forcefully displaced centuries-old communities in the Sindh region to build gated neighborhoods and resorts for elite and middle-class families. In a supposed effort to modernize Pakistan,³ Bahria Town fills its neighborhoods with models of new houses, lush lawns, golf courses, as well as numerous replicas of world-famous monuments like the Eiffel Tower, Taj Mahal, and Trafalgar Square. This uncanny wonderland sprawl that was made possible by horrific colonial state violence, is the focal point of artist Umber Majeed’s ongoing research project titled Trans-Pakistan Zindabad (Long Live Trans-Pakistan).

Trans-Pakistan was the name of a travel and tourism company owned by the artist’s maternal uncle in the 1990’s. In 2018, Majeed began drawing from these familial archives to imagine a world in which Trans-Pakistan has been revived as a company that provides walking tours exploring Bahria Town’s heavily policed land developments as well as surreal digital realms. Trans-Pakistan Zindabad is a speculative fiction used to explore the networks and structures of meaning, power, capital, materiality and tension that exists within contemporary South Asian diaspora.

NOTES ON ORIENTATION AND ARCHITECTURE

Psychogeography, as defined by Situationist philosopher Guy Debord, is “the study of the precise laws and specific effects of the geographical environment, consciously organized or not, on the emotions and behaviours of individuals.” ⁴ Concerned with the increased spectacularization and mediation of urban life, Debord conceived of an experimental behavioural strategy called dérive (“drift”), that encourages aimless strolling as a way of resisting the intended direction of urban plans and breaks away from the predictable, monotonous experience of capitalism. The virtual walking tours provided by Majeed’s version of the Trans-Pakistan company utilizes a similar strategy in which trespassing through Bahria Town is an act of resistance and denial of its claim to land ownership.

Like many suburban sprawls across the world, Bahria Town’s neighborhoods are hostile to pedestrians, and movement within their walls is only possible using a motor vehicle. In 2019, Majeed created a virtual reality walking tour called Zaameen.com in order to subvert this restrictive suburban plan. The title refers to a Pakistani online search portal of real estate dealers, developers, and properties for sale and rent. 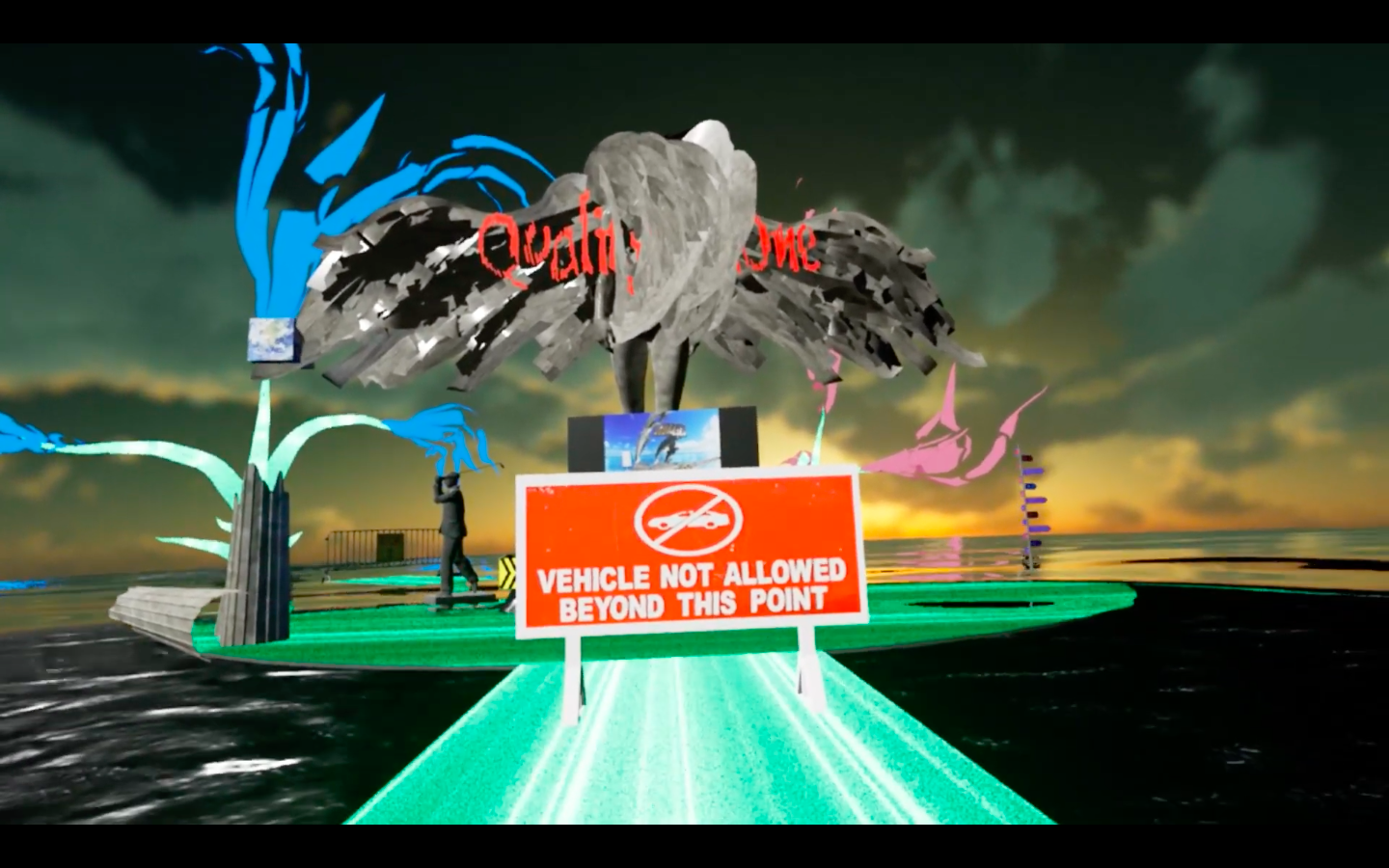 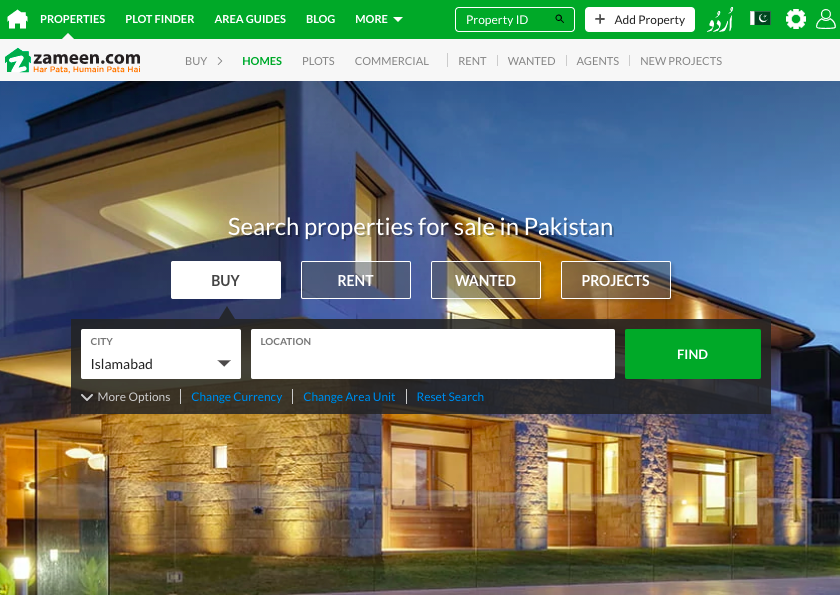 Inside the VR world, the viewer is oriented on a road facing a roundabout. The road’s texture is a glowing green monitor on which a standing red sign indicates that vehicles are prohibited from entering the roundabout. Colorful digitally-rendered statues and traffic signage float in the distance. The participant hears a voice encouraging slowness, loitering, and counter-clockwise movement. The same voice is heard again in a different animation excerpt of a Trafalgar Square roundabout in Bahria Town:

“As the user, if you move fifteen yards forward, the roundabout can be occupied. Moving counterclockwise. Step by step […] However slow or fast you proceed, you continue to trace away from the national grid and urban plan.”

While the roundabout is a highly efficient form of traffic management, architectural theorist Eyal Weizman points out that it is also entangled with a history of political uprisings. In his book The Roundabout Revolutions, Weizman discusses the trend of revolutions staged at roundabouts, focusing largely on the Arab Spring. He identifies that this seemingly banal feature is an expansive public space that serves an integral function in the city’s infrastructure. Therefore, “occupying a roundabout demonstrates the power of tactical acupuncture: it blocks off all routes going in and out.” ⁵ Conscious of this history, Majeed utilizes the roundabout as a specific architectural feature in much of her work, embodying the spirit of revolution and tactical disruption of orientation and architecture.

NOTES ON IRRATIONAL MATERIALITY AND AFTERLIFE

Trans-Pakistan Zindabad is an exercise in hyperbolic staging and satirical mimicry of the sleek visual qualities of Bahria Town’s force of gentrification. In Majeed’s work otherworldly shapes, colours and textures are patched together with pixelated glitches at the seams. Majeed’s creative output defies both medium specificity and progression. It may begin with a physical archive such as a tourist pamphlet, or a digital relic referencing telecommunication advertisements. A hand crafted collage or drawing then acts as a photorealistic documentation of these archives, blending together textual and pictorial elements that pose as posters for the new Trans-Pakistan company. Furthermore, the collages and drawings are scanned and used as digital assets in immersive virtual platforms. 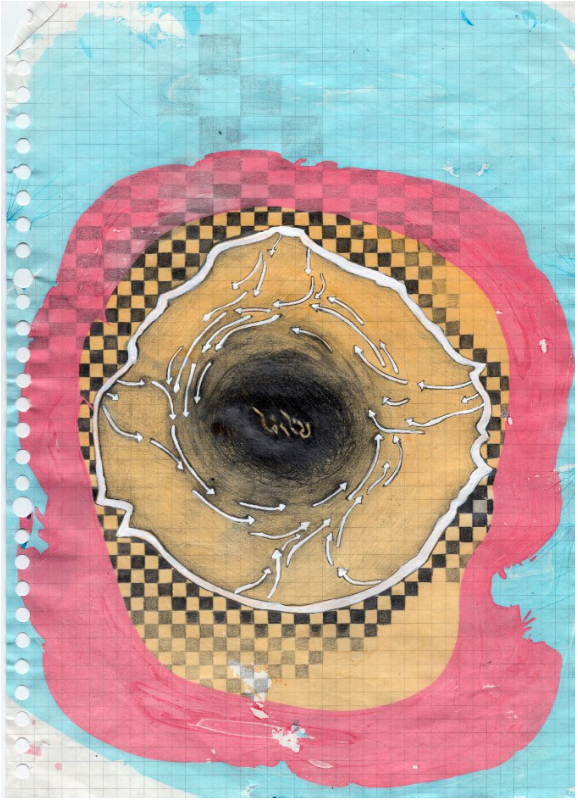 Ink and pencil drawing based on an Urdu Atlas depicting the core of the earth, by Umber Majeed 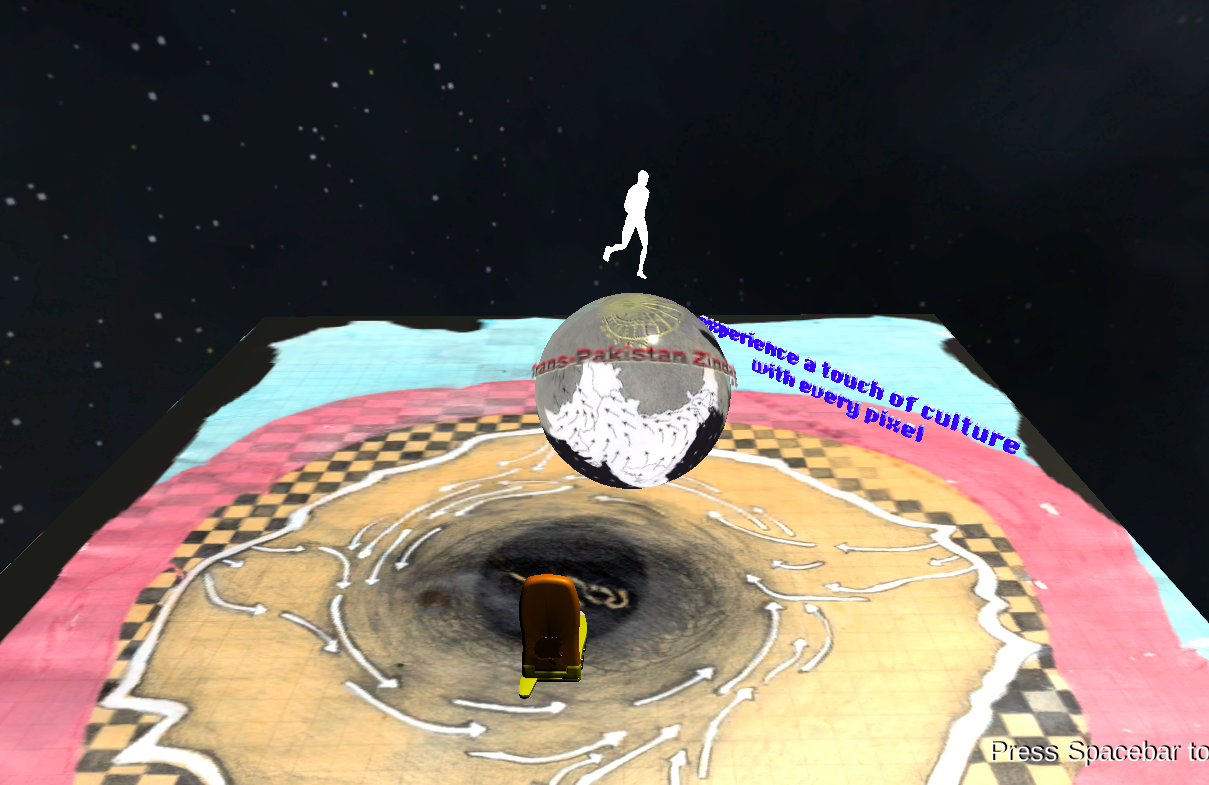 This tendency to dissolve boundaries between physical and digital as well as life and afterlife in this method of working is further reflected in motifs about the cyclical nature of a roundabout, the dunia (“world”), and counter-clockwise movement. However, instead of a seamless natural cycle, visual and auditory elements are assimilated in a hellish and disorienting manner. For example, pencil markings overlay a smooth color gradient alongside low resolution images and rudimentary shapes. The irrational and inconsistent aesthetic quality of Majeed’s work is symbolic of the irrational legality of nationalist and colonial power structures. It is a poetic representation of the horrific bureaucratic reality that, although the Supreme Court ruled Bahria Town’s acquisition of land illegal and inhumane, they proceeded to legalize the occupation.⁶

NOTES ON TENSION AND LIMINALITY

Global capital and labor networks have made it possible for upward economic mobility for people across the world. A 1997 report by the Pakistan Development Review titled Return Migration and Occupational Change: The Case of Pakistani Migrants Returned from the Middle East showed that statistically, from the 70s-90s, return migration was associated with upward economic and occupational mobility. ⁷ 1997 was also the year Bahria Town was established as a real-estate development company, and by 2015 they unveiled their first gated community in Karachi for a new wave of upper-middle class population.

Concurrent with these developments, in 2005, the Trans-Pakistan company was dissolved due to a lack of business begotten by the instability and security measures of the U.S. War on Terror in Pakistan that left the tourism industry in ruins. Inversely, it continues to be very difficult for Pakistani citizens to travel abroad due to tourist and visitor visa restrictions. Bahria Town’s replicas of world-famous monuments thus cater to the demands and desires of Pakistani citizens with disposable income to see different cultures, as they are unable to obtain travel visas.

These complex, contemporary conditions come together to form a sort of identity crisis within the walls of Bahria Town. From architectural motifs of the Sphinx and Horses of Helios, to full-scale reproductions of the Taj Mahal and Eiffel Tower, these sites act as actual travel destinations, blurring the lines between citizen, foreigner, and tourist. In the immersive web environment titled fotocopy.net, Majeed captures a state of tension and liminality inherent in this specific lived experience.

Upon entering fotocopy.net, the viewer is in a room surrounded by postcard panels displaying connect-the-dots drawing activities. Using a mouse or trackpad, you can illustrate your own version of kitsch corporate imagery (seen elsewhere as motifs in Majeed’s body of work). Walking into the centre cube of the room, you are transported to an outer space realm, and become an object in counter-clockwise orbit around a hypothetical planet. On the corner of the realm, a blue text reads “experience a touch of culture with every pixel,” connoting the innumerous slices of culturally and geographically specific references present in the work. The metaphorically unhinged liminal space that is fotocopy.net provokes a questioning of our own individual and disjointed vantage points within technological apparatuses and globalized narratives.

Trans-Pakistan Zindabad contextualizes opposing ideologies (east vs west), class inequality, and the destructive nature of nationalism. However, this context is juxtaposed with the illusion of a singular global civilization brought on by the internet as well as international flows of labor, capital, and information. In this expansive series of works, a viewer is encouraged to physically occupy virtual space, not only a way of protesting colonial occupation, but also to illustrate the tension inherent in contemporary dynamics of cultural expression, identity, and consumerism driven by appropriation, piracy, and vast digital networks.

Karina Iskandarsjah (b. Jakarta, Indonesia) is a Toronto-based visual artist and curator interested in cultural hybridity, technology, and the deconstruction of power structures. Karina holds an MFA in Criticism and Curatorial Practice from OCAD University, and currently works at Trinity Square Video, and Glory Hole Gallery for 2SLGBTQ+ artists.